When driving to rehearsals, performances and auditions, you want to put safety first. The standard timeline controls on Rehearsal® Pro are designed to show as much of your script as possible, and are easily accessible when standing or sitting on stage or in a rehearsal space.

You don’t ever want to try to manipulate these standard controls when driving. Use Car Play mode instead. And engage Car Play mode when you’re stationary, like before you start to move the vehicle.

To use Car Play mode, open any scene that you’ve recorded. You’ll see an icon next to the main menu in the upper right hand corner. (If you don’t see one, then you’re not in a Scene, you’re in a Script. Go to My Scenes and choose a recorded Scene from that script, or record a new scene from the script.)

Covering the script is by design:

Also, none of the standard timeline controls will be accessible when in Car Play mode. This too is by design, to avoid distraction when driving.

To rehearse the scene once in Car Play mode, just tap on the big Play button, with the right facing triangle, and the scene will begin with the traditional Rehearsal® Pro ADR beeps.

Once the scene completes playback, it will automatically repeat. You don’t have to hit play again, just like any other full scene rehearsal.

Once playback begins, the Play button turns into a Pause button: 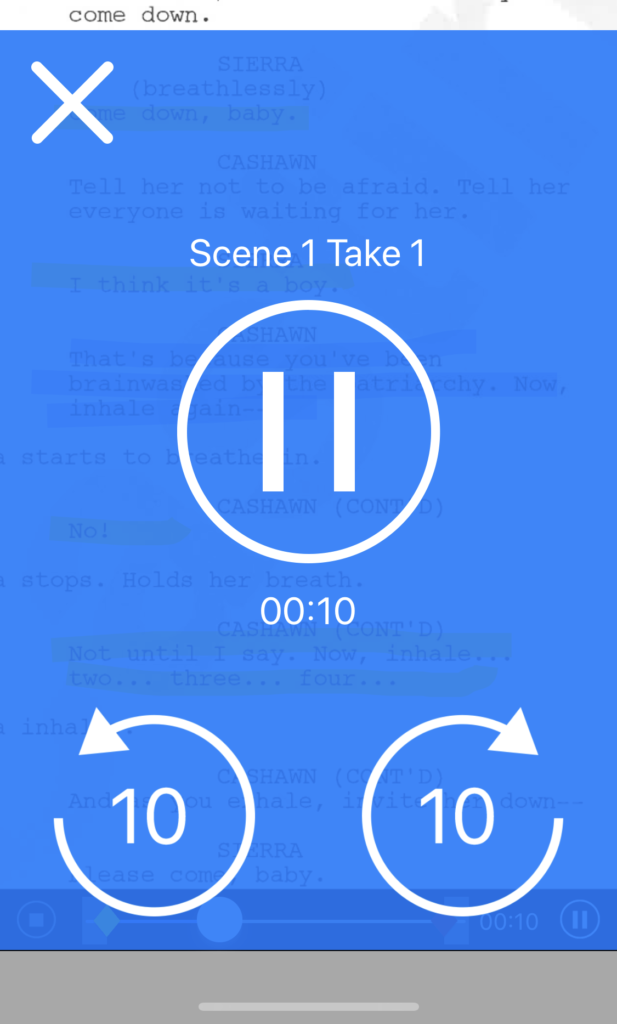 You can pause the scene at any time, and tap the Play button to resume.

If you want to go back or forward 10 seconds in the scene, tap the appropriate control below the Pause button:

To exit Car Play mode, tap the large X in the upper left hand corner of the blue control surface:

Be sure to exit Car Play mode only when it’s safe to use Rehearsal® Pro with its standard controls, when stationary.

And that’s it. Above all, be safe when driving – do not engage Car Play mode (or work with Rehearsal® Pro at all) when in difficult driving conditions.